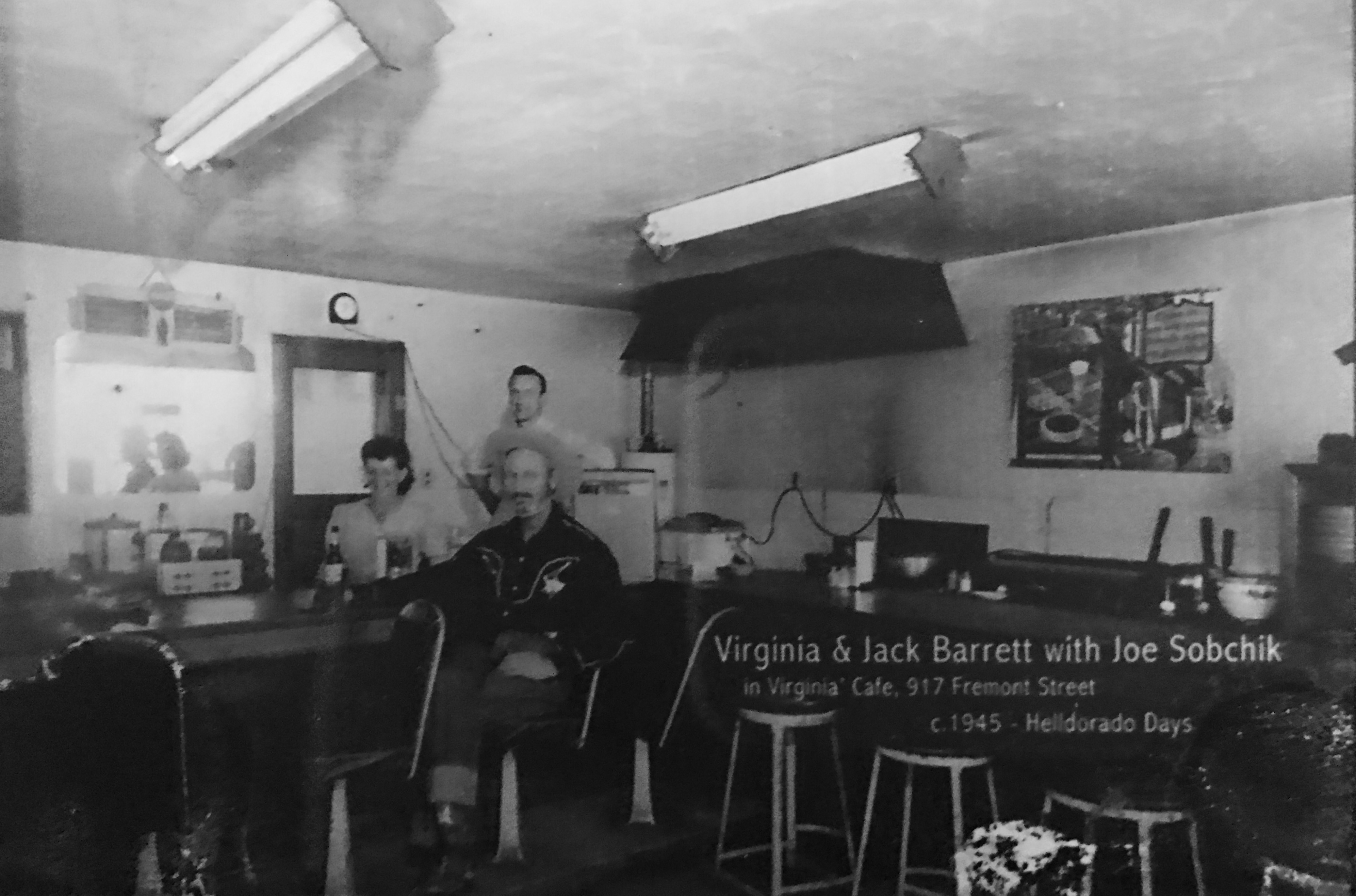 In 1921, Virginia Sobchik and her two daughters, Helen (age 4) and Stella (age 2), stepped off the train in Las Vegas and into a brand new life. Always a hard worker, Virginia found a job as a cook for the Union Pacific railroad. She would later meet an elderly Nevada judge, John Busteed, who hired her as a housekeeper. Virginia became his friend and caregiver until his death, and as part of his estate, she inherited the property between 9th and 10th streets on Fremont Street. By this time, Stella was working at Walker’s Laundry in Niagara Falls, a job that was to allow her to meet her future husband, Joe Sobchik.

Joe Sobchik was one of five children of immigrant parents. Joe’s father was a coal miner who died of black lung disease in 1933. Since this occurred during the depths of the Depression, Joe’s mother was unable to care for all five children and give needed support to her family. She was forced to put three of the five children in the orphanage. She decided to keep the oldest boy, and her only girl. Unfortunately for Joe, he was the middle child, and wound up spending the rest of his childhood and teen years in a Catholic orphanage.

Joe graduated from the orphanage and was a rising 19-year-old semi-pro basketball star playing for St. Johns club when he dropped off some shirts at Walker’s laundry. Joe saw his soulmate, Stella, counting out the cash drawer, and with his typical sense of humor, he asked her if  “she would like to take him to dinner,” to which she coyly replied, “Why, sure.” They started dating, and were soon married.

At this point, Virginia was developing the property on Fremont. She had already established a gas station/garage on the corner, where The Kitchen at Atomic stands today, and had erected some apartments. She had met and married Jack Barrett and wanted to open a cafe. Jack and Virginia were no longer able to manage and work all of these enterprises and decided to see if they could talk one of her daughters into working the family business. 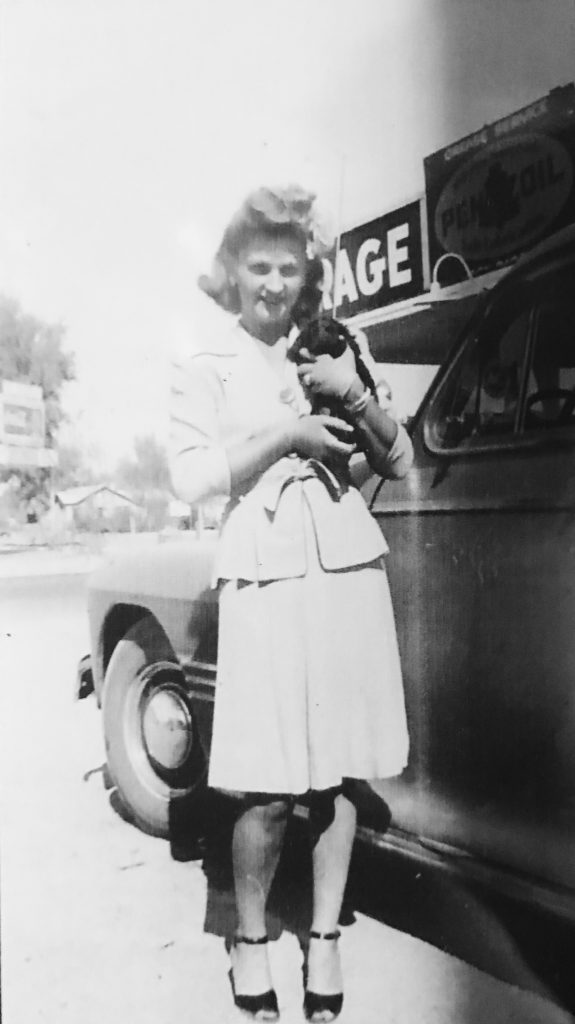 Stella and Joe, recently married, decided to give it a shot. So Virginia’s Café was born, with Joe and Stella manning the grill. This was during the war years, and because of food rationing, finding ingredients to serve was not the easiest thing for Joe and Stella. Still, they made a go of it, serving food to the travelers that stopped for gas, and catering to the locals who would line up in front of the building for the popular Helldorado parade.

Eventually, Joe tired of cooking for the public and decided that they should close the café and open a liquor store. Thus, Atomic Liquors was born, with the first liquor store license in Las Vegas. Always looking to boost the income of the store and establish a more consistent clientele, Joe & Stella then purchased the liquor ‘pouring’ license from the Lido Lounge, which was closing in a downtown casino. This allowed them to augment their takeout trade with beer, wine and mixed drinks served over the counter while becoming the oldest freestanding bar in Las Vegas. This endeavor also created an entirely new type of liquor sale license called ‘The Tavern License’: Atomic was issued the first ever license, #00001.

In its heyday, Atomic had a local, working class clientele that was bolstered by regular visits from celebrities looking to avoid the attention they attracted on the Strip or downtown. The likes of the Rat Pack, Barbara Streisand, the Smothers Brothers, Clint Eastwood and other notable characters could be seen enjoying their favorite beverage and playing a friendly game of pool after their shows or productions. Barbra Streisand even noted in her book that she was a regular, stopping in on every trip to shoot pool and chat with her friend Stella. Atomic was open 24 hours a day and drew quite a crowd of casino workers looking to enjoy themselves after their shifts, stating that, “you never know who might stop by.”

The Guantlet, an episode of the original “The Twilight Zone” and parts of the movie Casino were filmed inside Atomic, as well as inside the adjacent garage, which served as a production studio for Martin Scorsese and crew for more than a month. Most recently, Atomic can be seen in the famous car crash scene in The Hangover.

Joe and Stella loved Atomic, spending many hours each day interacting with customers. It’s because of this love they continued to run Atomic, with help, until Joe’s death in October 2010. Stella passed away just three months after the love of her life. Both Joe and Stella were age 91 at the time of their deaths.

In 2012 a group of investors led by longtime downtown Las Vegas attorney Lance Johns purchased Atomic from the Sobchik’s son, Ron, and remodeled it to its original glory. During the remodeling, a floor safe was discovered, full of receipts and other paperwork from Atomic’s early days. It is estimated the floor safe and the contents inside were sealed sometime around 1950. The floor safe is in its original location in the bar and on display with a transparent glass cover.

A tribute to the couple is on permanent display at Atomic, and the bathrooms have been remodeled in a ’50s style and named Joe’s and Stella’s (men & women) as a tribute to the founders. The women’s bathroom is pink, which was Stella’s favorite color.