The bar, at 917 Fremont Street, about a 3-minute walk from the El Cortez Hotel downtown, was originally founded by Joe & Stella Sobchik in 1952, and was named for customers’ habitual watching of atomic blasts from the roof. It was originally built in 1945 and was called Virginia’s Cafe. 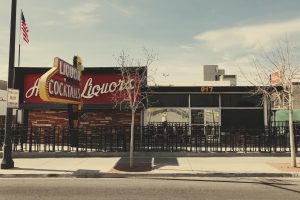 As the story goes, Joe was tired of cooking food, and the customers seemed more excited about sampling his secret-ingredient ‘Atomic Cocktails’ while watching the nuclear blasts from the nearby Atomic Test Site. So in 1952, the couple renamed the business Atomic Liquors, constructed a classically huge, wrap-around bar and built a one-of-a-kind landmark neon sign that still shines today.

In 2012, a group of investors led by longtime downtown Las Vegas attorney Lance Johns purchased Atomic from the Sobchiks’ son, Ron, and remodeled it to its original glory. Like much of old Las Vegas, Atomic has showbiz in its veins: The Rat Pack and the Smothers Brothers drank here after their nightly shows, and Barbra Streisand even had her own seat, which has been restored and is on display.

Step inside and be transported to a time unlike any other, when Las Vegas was still Atomic City, U.S.A.